This is why I keep locations secret.

Sometimes people wonder why I don’t share locations with the exception of face-to-face explores with people I trust. It’s not because I don’t want others to discover what I’ve discovered – in fact, nothing pleases me more than seeing what another photographer shoots in a place I’ve visited. I keep these places secret because almost every time a lesser-known location is made public, it’s trashed in mere months.

In this post, you’ll see before and after shots of a school that I first visited in 2008. The “new” photos are from last weekend.

I didn’t really remember what I’d shot my first time around, so the “after” shots were pretty much approximations of my originals. Some are moved a bit or at different focal lengths, but they get the point across.

The most crushing example of the damage that a few years of being a well known abandoned building struck me in the theater. What was once a comparably beautiful room complete with chandeliers was now a complete wreck – riddled with graffiti and completely devoid of light fixtures (They had been torn down). 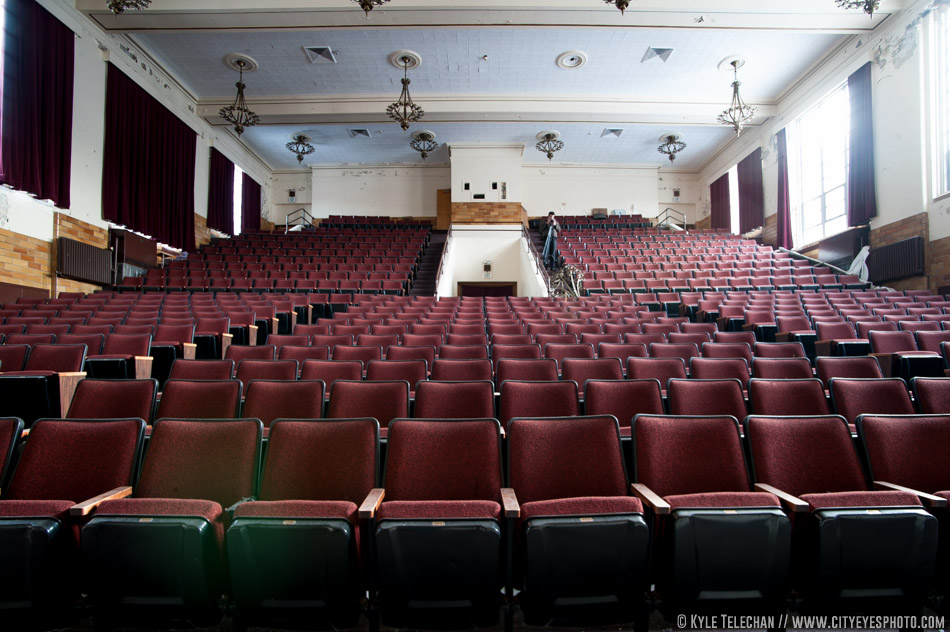 2008 – Auditorium from the theater floor. Notice the chandeliers up top and the mostly pristine seats. 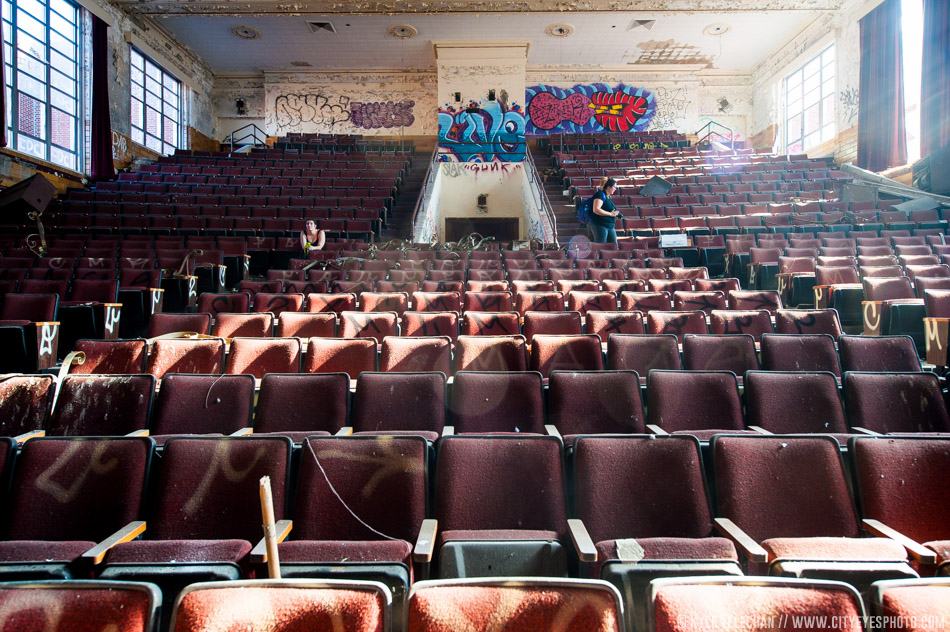 2014 – chandeliers are gone, seats are trashed. The lens flare is an artifact of my hastiness. I wasn’t super happy about the changes, so I didn’t want to take a lot of time on the photo.

The same went for the stage. Not pristine by any means, but the decay was clearly from nature and not from intentional vandalism. The piano to the left of my friend is now completely destroyed – smashed and broken by vandals. The screen is now ripped down and covered in graffiti. 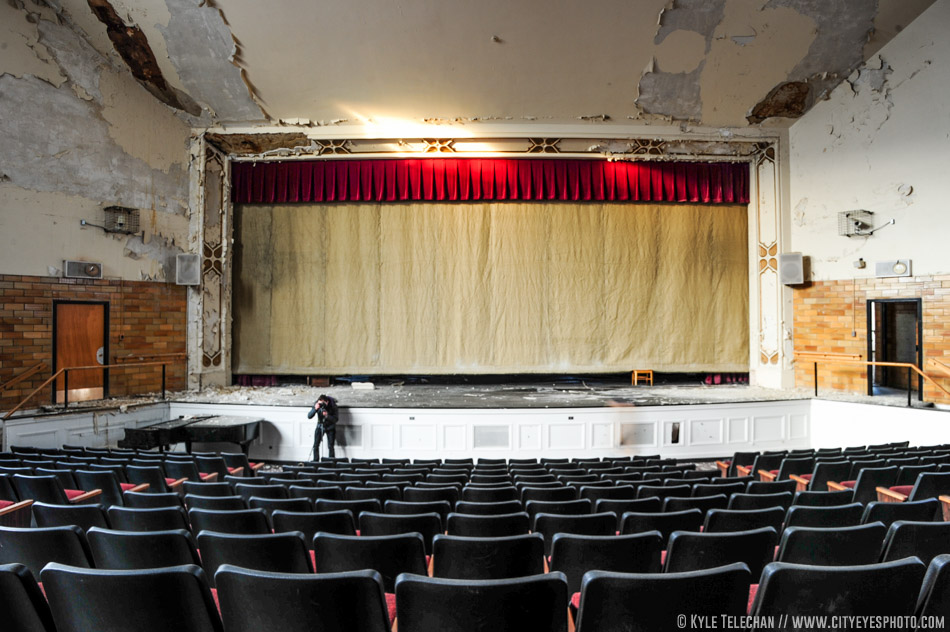 The metamorphosis of the chemistry and biology labs were incredibly unfortunate. The first time my friend had visited, there were science projects set up on desks, dioramas up, a whole cabinet full of microscopes, and a beautiful wooden case with glass panes that held all sorts of chemicals and science experiments. All of that was gone and broken when we went back. 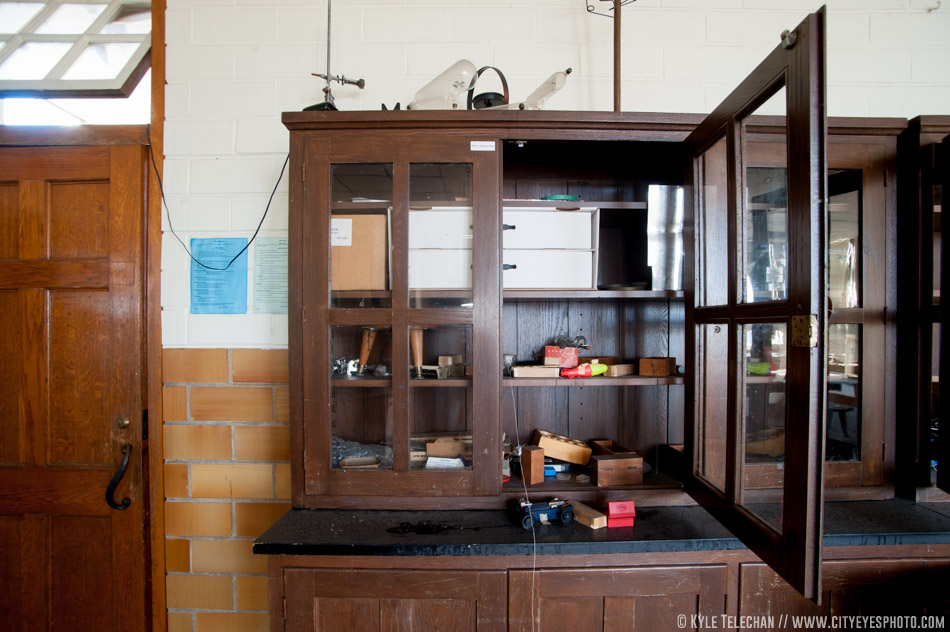 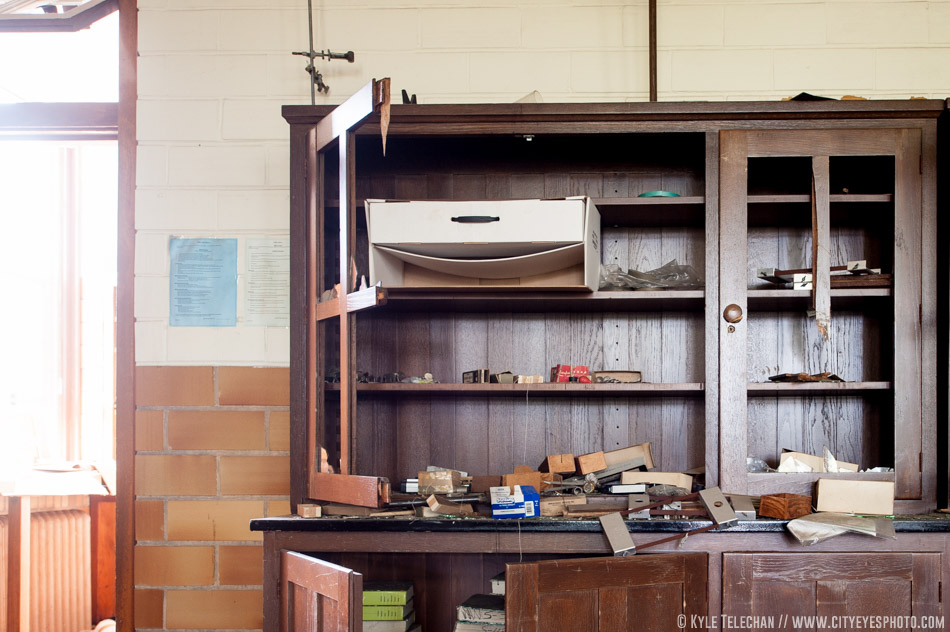 The hallways were all the same. Where once there were lit fluorescent lights, graffitiless walls, and artifacts of the time that the building was a school, now there was only destruction. The only saving grace is the fact that nobody has vandalized the painting to the right of both photos yet. I’m contemplating calling a historical society or something to salvage it before the vandals get to it. 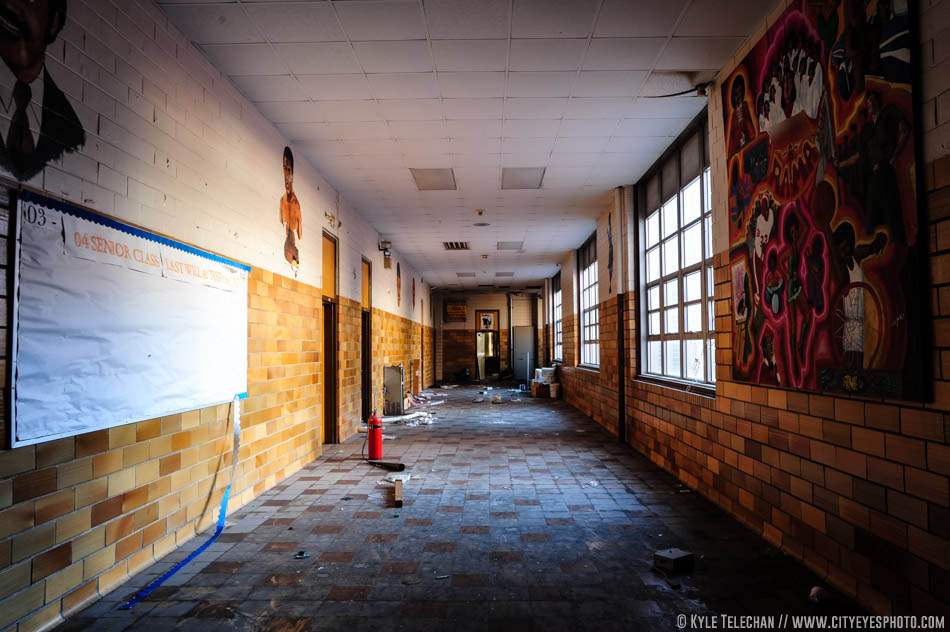 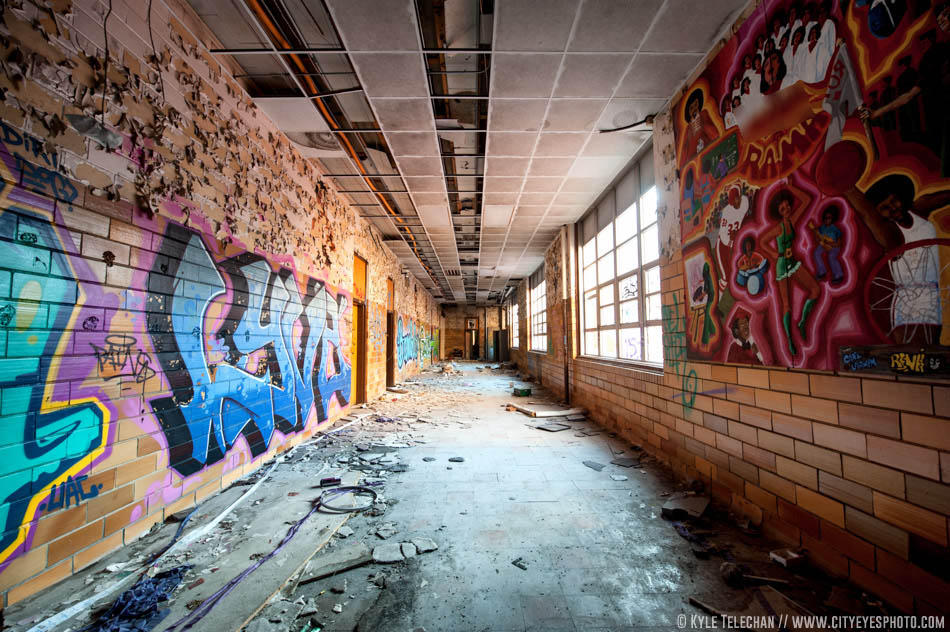 Nearly everything that wasn’t bolted down has been trashed, moved, or stolen. A couple of old Apple computers that I had taken photos of on my first trip through were now destroyed and strewn about the school’s hallways. Since I couldn’t find them in the original room, I took photos of some of the remaining computers, which were in awful shape. 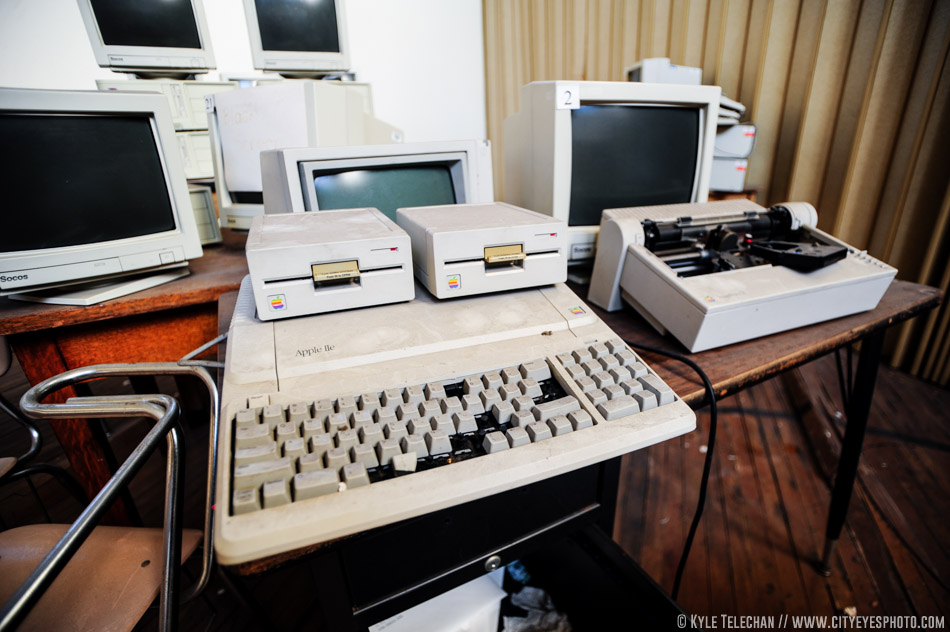 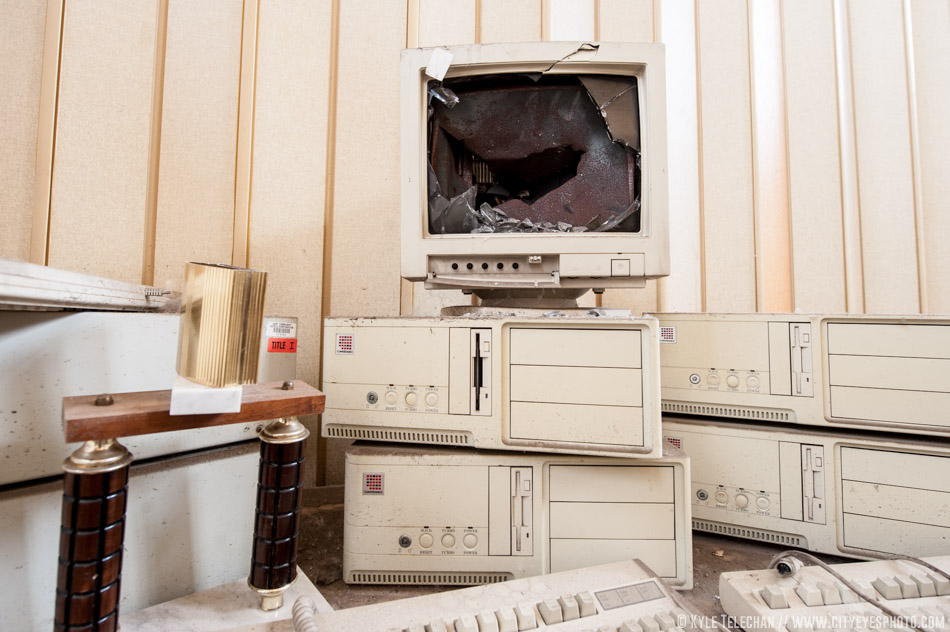 As much as things change, some stuff stays nearly the same. The only changes between two photos of a poster of Michael Jackson – one before he died and one after – are a missing water fountain and a spraypainted “RIP”. 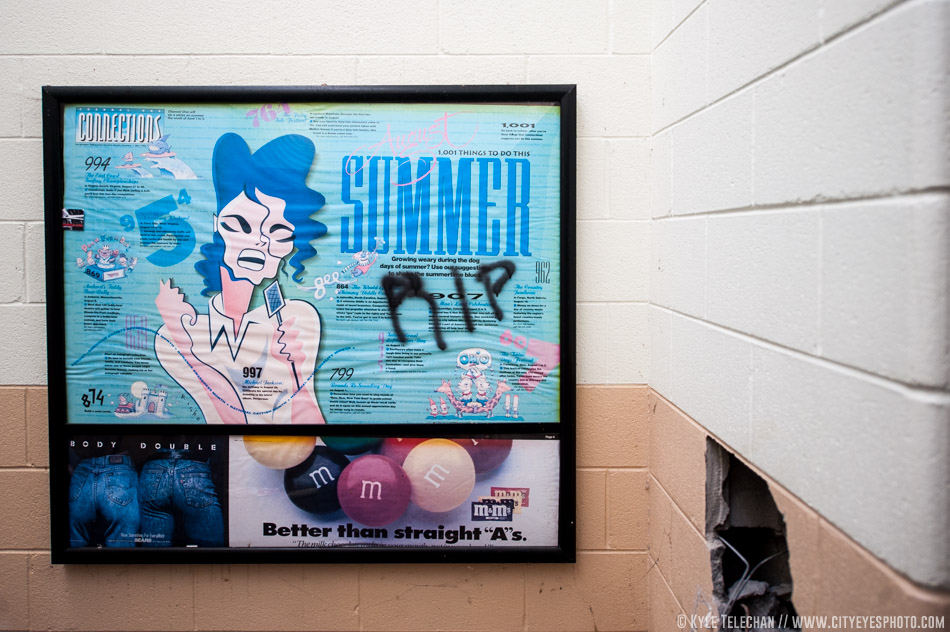