It’s sad walking through the abandoned hallways of a once-bustling school. The ghosts of what once remained – kids yelling, running, talking, filling classrooms, learning – are gone and replaced with darkness, uneasy silence, and the ever-increasing decay and destruction that an abandoned building suffers.

A historic school in an area where it’s needed the most, left to scrappers, vandals, and natural decay. Halls and halls of empty classrooms, chalkboards frozen in time, books that could be used elsewhere, and equipment left to the elements and scrappers, haunt this school.

It’s an especially odd feeling when you’ve actually been to the school when it was active – I remember taking photos here on assignment once a few years back – at that point they were looking at renovations to fix the place up. Now it’s closed – presumably for good. 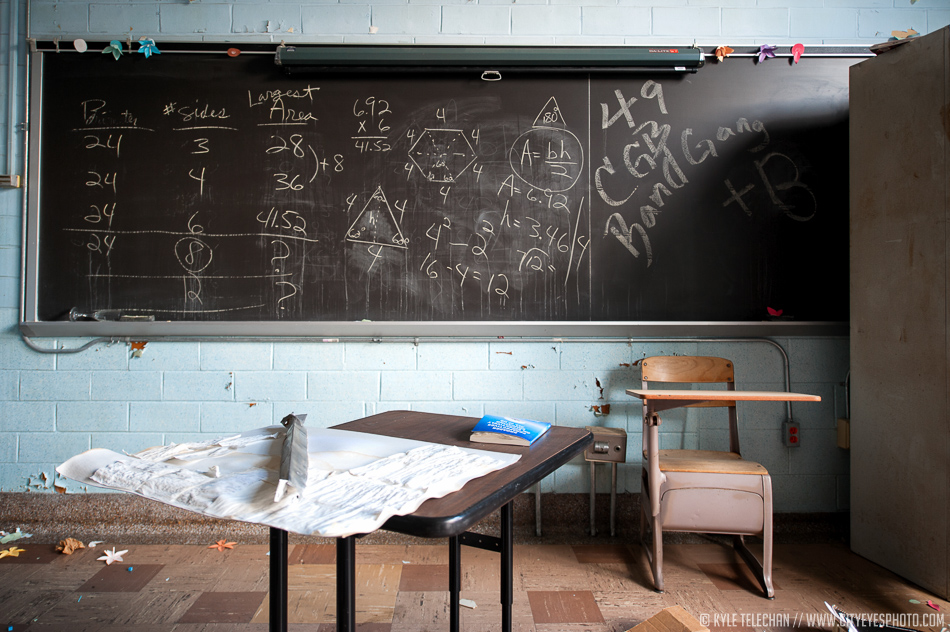 Remnants of the last math class in this room sits untouched, somehow. 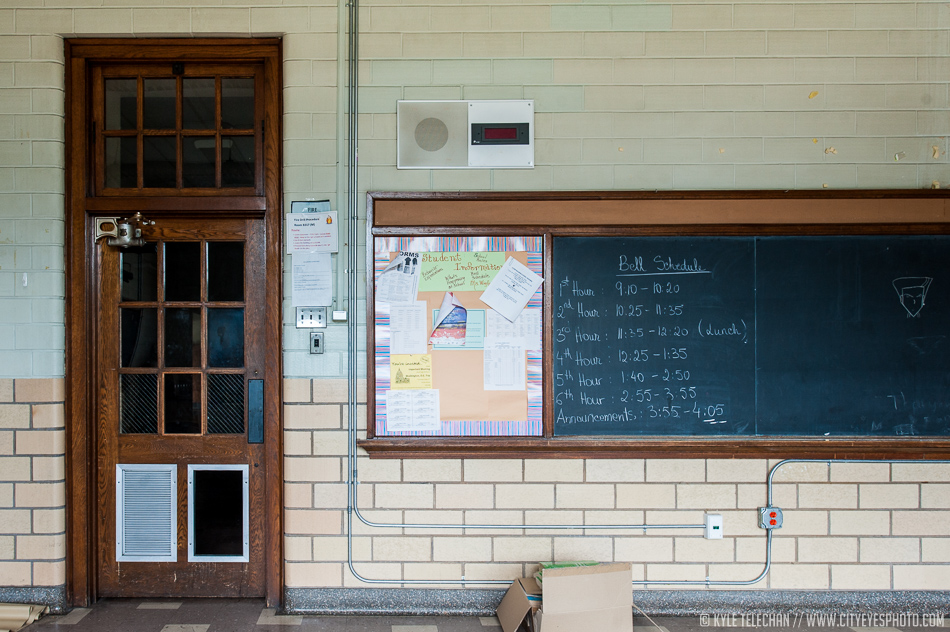 This classroom was pristine – I had to enter through the small hole in the door, so I’m not surprised. The itinerary from the last day of school still remains on the chalkboard, alongside announcements for trips and clubs on the bulletin board. Boxes of lightly-used books lined the walls. 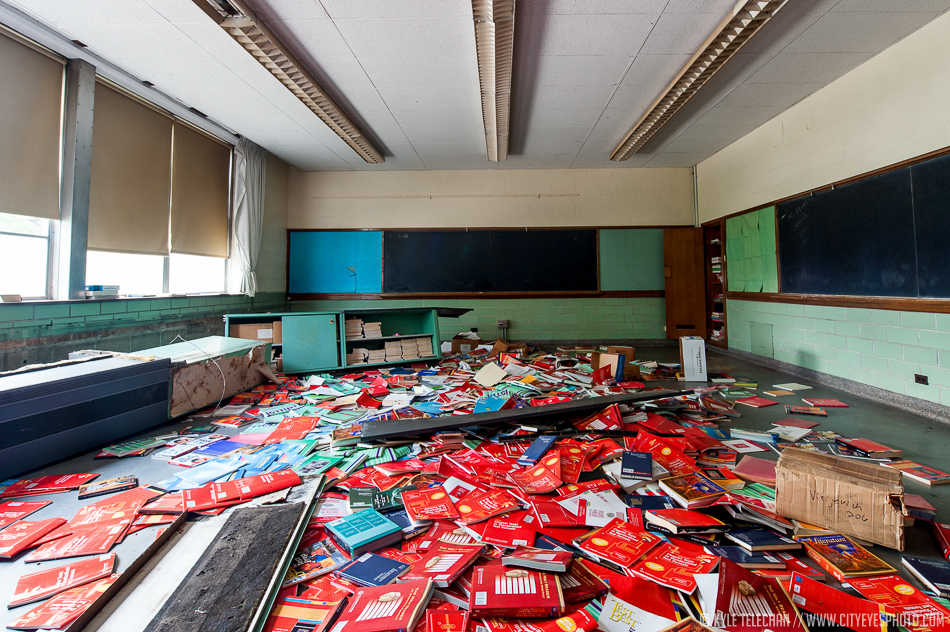 One of the worst things about exploring these old schools is the waste. Books and equipment that could be used elsewhere in the ailing city’s school infrastructure are left to decay or be tossed about by vandals.

Another stark reminder of the once full classrooms – decorated ceiling tiles. I presume every class decorated their own. I’m not sure how far back they go, but the tiles stretched from wall-to-wall. 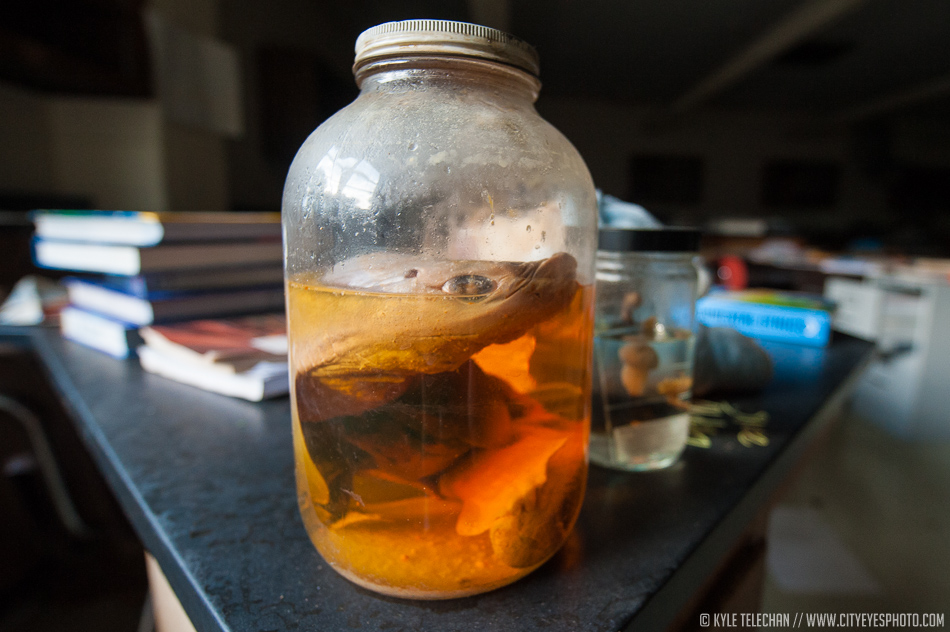 Jars of preserved animal specimens sit out in a science class in the abandoned school. I believe this one is a preserved eel – behind it were some fungus specimens and there was a frog in another room. 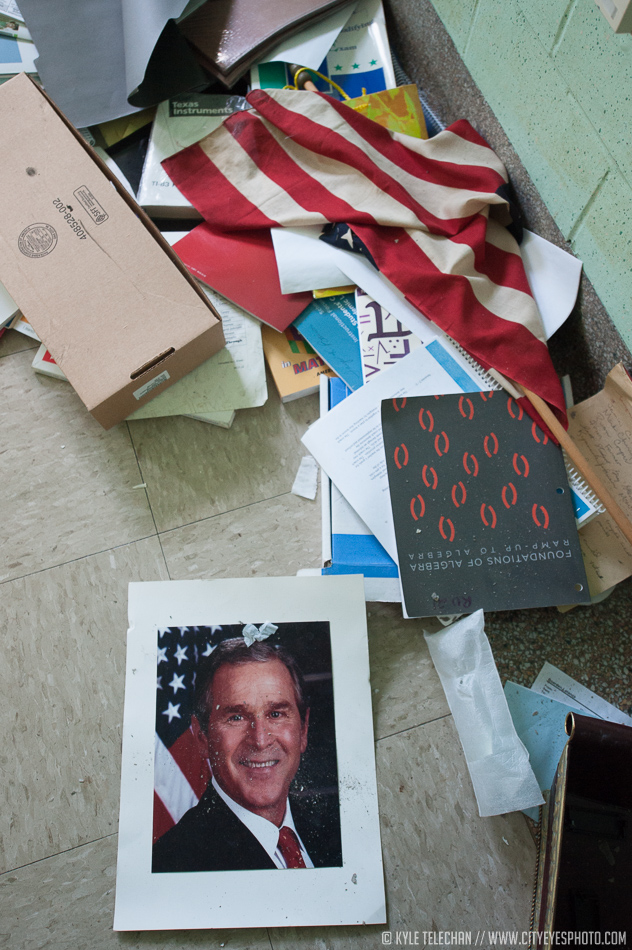 Artifacts found in one of the smallest math classrooms I’ve ever seen. 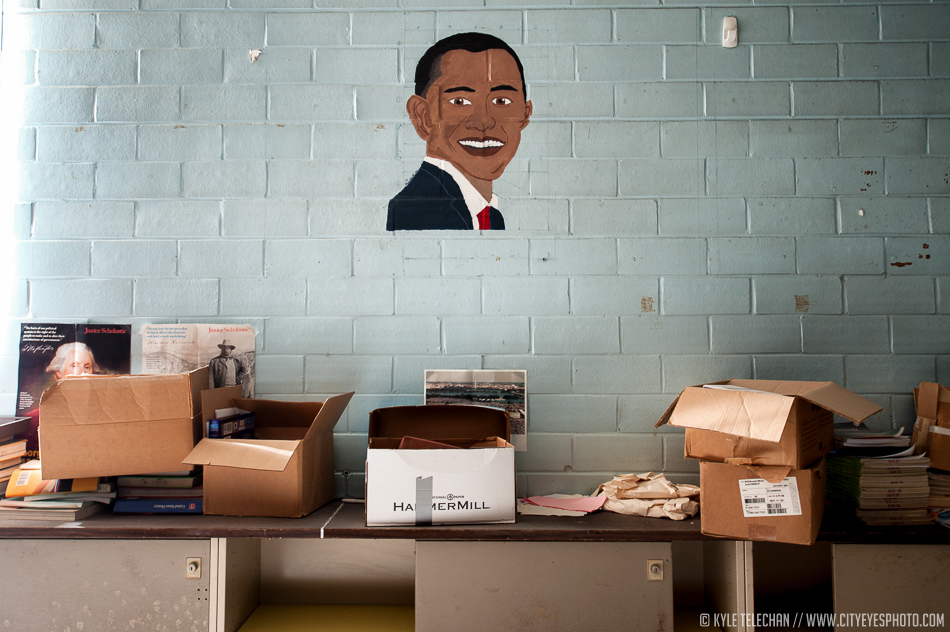 A painting of Obama overlooks the abandoned classroom. 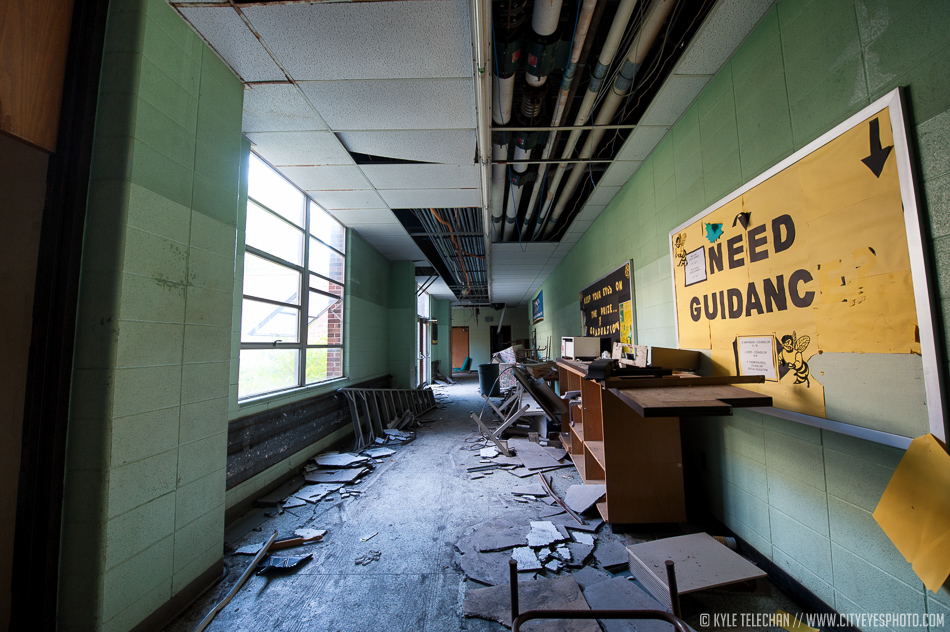 This hallway connected the main school to a series of guidance offices. 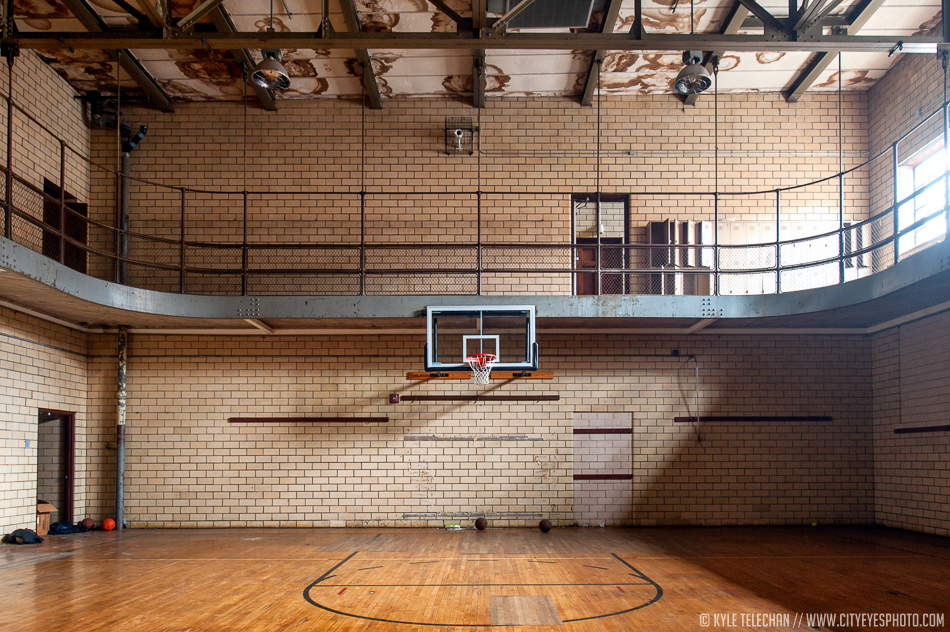 There were some very deflated basketballs on the floor near this hoop. I’m not sure if they were left there on the last day of school, or if fellow explorers dragged them out of storage. The storage area to the left of this floor held a shoebox full of letters circa 1970 from various colleges asking for the school’s participation in state track meets as well as a pile of old running shoes. 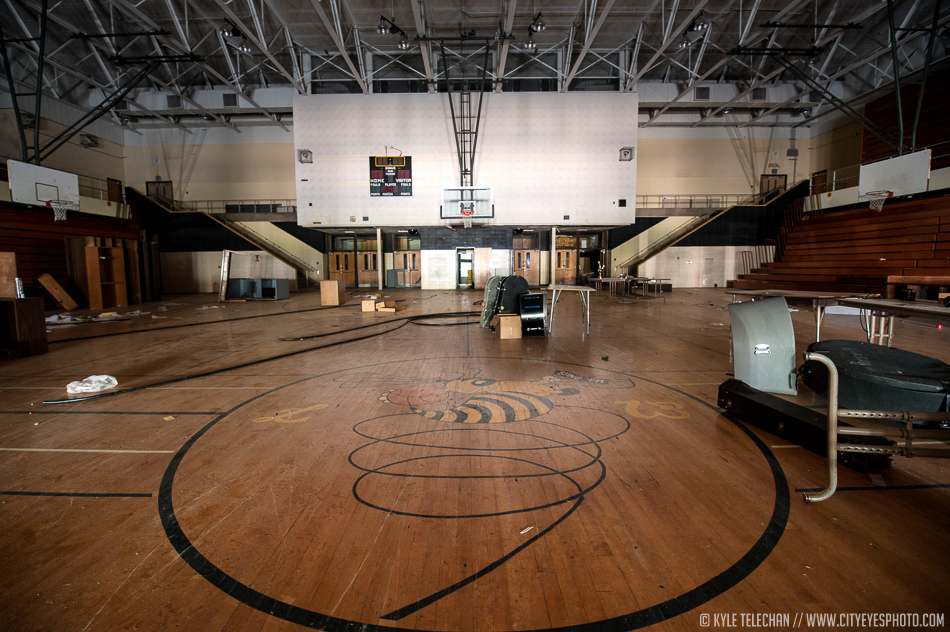 There’s something especially disconcerting with being in the gym of an abandoned building. My brain expects yelling crowds and activity, but all it gets is the sound of my shutter and a bit of light spilling in from the exit doors. 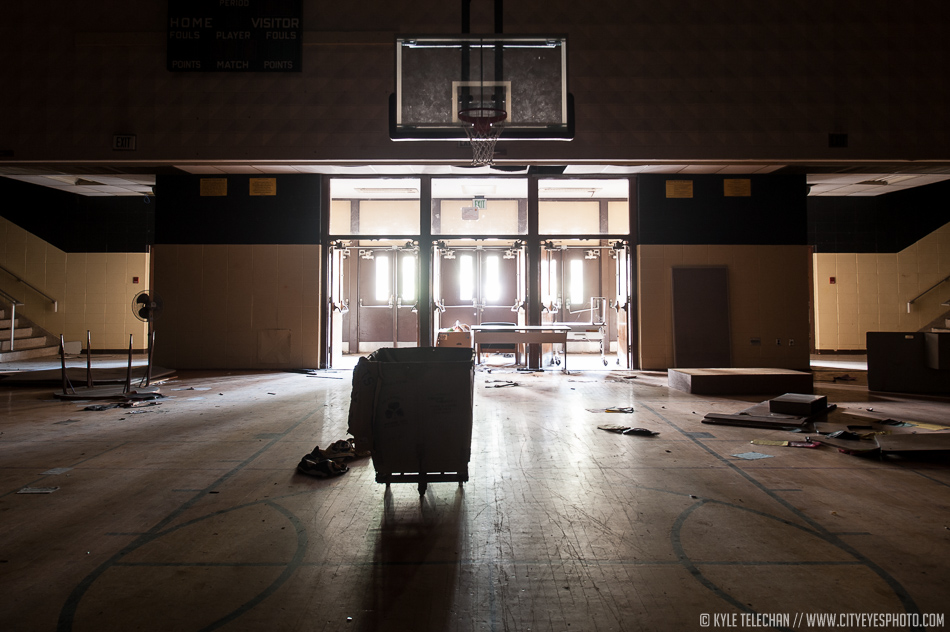 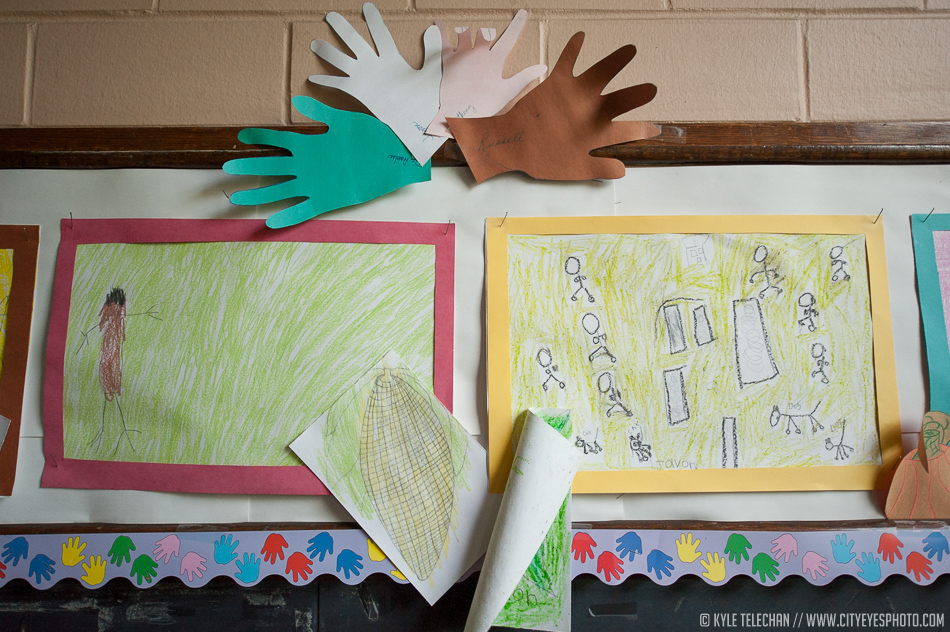 It’s upsetting that the kids who made these drawings and handprints are being displaced – likely crammed into an unfamiliar, overcrowded, underfunded classroom.